The Lord placed in the heart of Elder Q. “Ricky” Ricardo McCrimmon to enter into the pastorate. Elder McCrimmon patiently waited on the Lord for direction. After much prayer and supplication, the Lord spoke to Elder McCrimmon and instructed him to start a church and name it Capital Temple. God said He would make us the apex, a house of refuge & strength for all people, and give us the city.

The first prayer service was held in December 1987 at the home of Brother Daniel and Mother Alice McCrimmon. Those in attendance that night were Elder Ricky and Lady Alfreda McCrimmon, Sister Dorothy Knight, Sister Delores Brown, and Brother Danny McCrimmon, Jr. The anointing of the Lord was there. The first members to join the Capital Temple family that day were Sister Dorothy Knight, Lady Alfreda McCrimmon, and Mother Alice McCrimmon. For the next five weeks, services were held at the home of Brother & Mother McCrimmon. 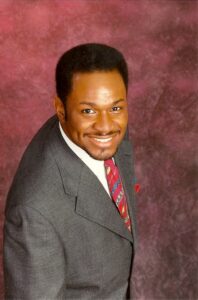 Elder McCrimmon was obedient and followed every instruction from the Lord without wavering. He, along with his wife and sister, set out for their first administrative challenge and arranged to meet with the management of the Days Inn. Elder McCrimmon gave management his contract, the amount he could afford, and thanks be to God, the contract was signed and settled in Capital Temples favor. Many laughed and made mockery because services were held in a hotel banquet hall, but that did not deter Elder McCrimmon from doing the will of God; he knew what God told him. In that first year, the Lord added to the church bountifully. The first families to join were the McKnight’s, the Campbells, Sister Debbie Crawley, the Holton’s, the Hunts, and the Armstrong’s.

On February 28, 1988, Elder McCrimmon was officially installed as Pastor of Capital Temple Church of God in Christ. Bishop Ivory Holden of Bridgeport, Connecticut brought the installation message. The Lord continued to bless!

The first Sunday in May 1991, the Capital Temple Church family moved to 2373 Rhode Island Avenue, N.E., Washington, D.C., which was previously the home of the American Cancer Society. The Lord gave Pastor a vision on how His house should be beautified and the people had a mind to work. The Lord further blessed and allowed us to grow numerically. The church faced many challenges since its inception, but because the church was founded upon prayer, God’s word, and obedience to the will of God, it has and shall remain an apex and lighthouse for the lost and God’s people.

The year 1993, was filled with many emotions. Pastor Rick recorded his first and only critically acclaimed CD, Jesus… A Friend Unfailing, which was nominated for a Dove award. A few months after the live recording the Lord called our beloved First Lady Alfreda McCrimmon home to be with Him. It was hard for Pastor Rick, his health began to fail, and the church was being tried on every hand, but the Lord sustained the vision and sent help.

In 1995, the Lord in His infinite wisdom saw fit to take Pastor Rick from labor to reward. During this time, many felt we should have given up and shut the doors, but not so. We continued to press onward through many times with tears in our eyes and heavy hearts, but the Joy of the Lord was our strength.  During this, time the Lord raised up one among us to take the helm and to continue to lead us to our ultimate victory in the person of Evangelist Jayme McCrimmon.

After much prayer in March of 1996 Evangelist Jayme McCrimmon, with the blessing of Superintendent John I. Little, accepted the call to Pastor.  Pastor McCrimmon moved as lead by the Spirit of Lord.

The church began to grow numerically and spiritually.  One Saturday morning during prayer, the Lord moved on Pastor McCrimmon to change the sign on the outside of the building.  The pastor was hesitant, but when the Lord sent confirmation through Bishop G. Alan Porter. The sign was changed to reflect her leadership; and with that change came to pass what the Spirit of the Lord spoke to her, “We could no longer hold our Sunday services in that building”. In 2000, Capital Temple relocated its Sunday morning service to 1730 Hamlin St. NE, but 2373 Rhode Island Ave., would remain our office space, and bible study for the next 10 years. For many years Capital Temple had been searching for their own building and they made a failed attempt to purchase a warehouse building at 10 & Franklin St. N. E., they even tried to acquire the 1730 Hamlin St., location but things did not work in their favor. Eventually, they were going to have to find someplace else to hold Sunday morning service because this building was on the market. In 2004, with guidance and direction from the Lord, Pastor Jayme stepped out on faith and purchased 3100 18th Street, NE, Washington, DC.

In 2007, while renovations were taking place, Capital Temple moved its Sunday morning service again to Shiloh Church of God Seventh Day; 5701 Eastern Ave, Hyattsville, MD, and the Lord continued to meet us at each location.

Finally, on April 18, 2010, Capital Temple occupied our newly renovated and long-awaited promise land, 3100 18th Street N.E.  While Capital Temple’s almost ten years in this location was nothing short of a miracle, Pastor McCrimmon was moved to make another change. It was the desire of the Pastors and Leaders to find a place more conducive for parking, office space, and church fellowships.  With the help of the Trustees, Deacons, and Elders Capital Temple was able to sell 3100 – 18th Street, N.E. Washington, DC and purchase 3105-3107 Hubbard Lane, Landover, MD.  February 3, 2020, was our first Sunday at the Hubbard Road property and the feeling is unanimous, “This is Home!”

Capital Temple stands sure of the Lord’s promise. If we delight in Him, He would give us the land and allow us to live up to the legacy of our founder (Capital Temple, The Center of Hope) and the vision of our current Pastor (God’s House, a place of Refreshing) as we add daily to the Body of Christ.

"God's House | A Place of Refreshing